Apple Watch , particularly after the Series 3 launch in 2017, took the market by storm and it continues to widen the gap not only in terms of market share but also technology-wise too. Each new iteration has come with valuable health tracking sensors that actually saved more lives than any other in the industry.

Amid the Covid pandemic-induced shortage of chipsets and difficulties in sourcing raw materials and components, there was little uncertainty of Apple Watch Series 7 making its way to the market. Also, there were rumours that the new design and quality issue, may force apple to shelve the plan to launch the new Watch for 2021.

But, in mid-September, to everyone’s relief, Apple announced the Watch Series 7 along with iPhone 13 series. In India, the former was released a month later on 15 October

The new Apple Watch comes in bigger screen sizes and improved sensors for activity tracking and more, compared to the Watch Series 6.

I have been using the Watch Series 7 for more than three months and here are my thoughts on Apple’s most advanced smart wearable yet.

The Watch Series 7 comes with a larger screen real estate but retains the familiar squarish lozenge design language with a digital crown, a mic, and a side button on the left, and a speaker on the right side.

As said in the introduction, the latest Apple Watch iteration comes in bigger –41mm and 45mm– sizes, as compared to predecessor’s–40mm and 44mm– sizes.
Apple says the display is 20 per cent bigger and yes there is a noticeable distinction between them when placed side-by-side together.

The border around the display is said to be reduced by up to 40 per cent to increase the functional touch screen on the top panel.

Replying to the messages on the Watch Series 7 is such a huge improvement. It now comes with a new QWERTY keyboard, wherein users can do both types or swipe with the QuickPath feature by sliding fingers across the on-screen keypad. I am also told tha…

Also,  the support for the bigger font size of the characters helped me a lot to read the messages better than ever before. These are really good value-addition at least for me, as I am diagnosed with Keratoconus eye disorder. 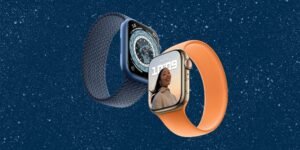 Add to that, the bright big screen makes the watch face look better and eye-catchy too. Apple has rolled out several new watch faces since the Watch Series 7 released in October and the latest being the Unity Lights, launched recently to mark black h…

The Unity Lights is one of the most unique watch faces and is designed using 2D ray tracing, a technology never before implemented for a watch face, says Apple.

Each pixel on the screen simulates the light and shadow falling across it and the movement of the clock hands simultaneously reveal and hide the light. It changes dynamically throughout the day.

And, of course, the Contour, Modular Max, and Nike Bounce exclusive to Watch Series 7, which spread to the edges of the widescreen and definitely make the onlookers understand that the user owns the latest Apple Watch.

Apple offers Watch Series 7 in aluminium and stainless steel cases. The former comes in five colours including midnight, starlight, green, and a new blue and (PRODUCT)RED, along with a range of new band colours and styles.

Inside, the Apple Watch Series 7 houses a new generation Apple S7 SiP (System-in-Package) with a 64-bit dual-core processor. It is paired with Apple W3 wireless chip and U1 Ultra Wideband chip. The former comes in handy for pairing with devices smoothly and the latter for tracking items via the Find My network app to the precise location.