VMware announced on Tuesday that it has integrated cloud services to new versions of its on-premises vSphere server virtualization and vSAN storage virtualization software, allowing enterprises to centrally manage their virtualized workloads on-premises and in the public cloud through a single, cloud-based interface.

The new products, called vSphere+ and vSAN+, will not only speed deployment and simplify management across a hybrid, multicloud environment, but they will enable IT administrators with in-house data centers to quickly add new cloud services, such as disaster recovery, and add additional compute and storage capacity in the cloud when needed, VMware executives said.

“It is important to offer cloud-like benefits and bring cloud services to on-premises workloads. This has been one of the major asks we constantly hear from our customers,” said Weiguo He, VMware’s senior director of product marketing during a briefing with the media.

The new vSphere+ and vSAN+ products come with cloud-like pricing. Customers will have to switch to a consumption-based subscription model, He said. The company initially announced the product strategy, called Project Arctic, during last October’s VMworld conference. It’s part of the company’s broader initiative to provide enterprises with a complete, integrated set of software and cloud services they need to go multicloud, from public and private clouds to the edge.

IDC analyst Gary Chen said vSphere+ and vSAN+ will interest many existing VMware customers because of the added cloud services and the ability to manage workloads through a single cloud console.

The new solutions are a big change to how VMware has developed software in the past and how it charges for software, but offering cloud-based, subscription-based applications is the trend in the software business, he said.

For example, while some enterprises will adopt them right away, others will take a wait-and-see approach and see what the early adopters’ experiences are in terms of return-on-investment and total cost of ownership as well as see what other new services VMware will come up with as part of Project Arctic, he said.

“A lot of customers will be interested in this, whether they buy it immediately, a year from now or three years from now,” said Chen, research director of IDC’s software defined compute. “There is going to be a transition where people experiment with this and get comfortable with this, and in the long term, a lot or the majority of customers will be using this.”

The new products – vSphere+ and vSAN+ – will be available by the end of the current quarter, which ends July 29, the company said. The company will provide more precise details on subscription-based pricing when the products are released, VMware’s He said.

How vSphere+ and vSAN+ Works 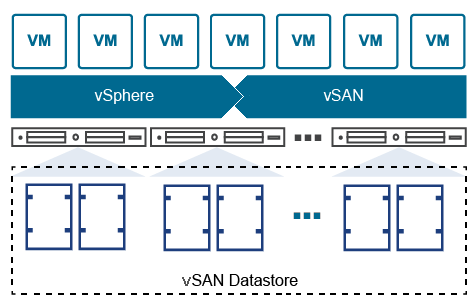 In a typical enterprise, customers will have many vSphere and vSAN deployments distributed across multiple on-premises locations, He said. Through a new vSphere+ and vSAN+ subscription, enterprises will install a cloud gateway at each on-premises site, which will connect to their in-house vCenter management consoles.

Next, they connect each cloud gateway to the VMware Cloud Console, which is the same cloud-based management tool that manages other VMware cloud solutions, such as VMware Cloud on AWS, he said.

“Customers register any number of vCenter (implementations) in the Cloud Console and convert them to subscription,” he said.

Once deployed, customers gain centralized management of the virtualized workloads through the VMware Cloud Console and can access add-on cloud services, such as VMware Cloud Disaster Recovery, an on-demand ransomware and disaster recovery service, he said.

During the entire process, there are no disruptions to the hosts and workloads on-premises, he said. Organizations can also take advantage of the cloud connected services without making changes to their existing applications or hardware, the company said.

“This is just the start of the hybrid and multicloud services we are integrating with vSphere+ and vSAN+,” he said.